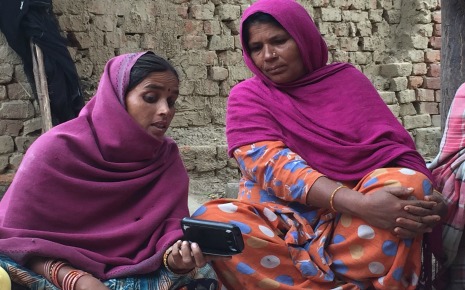 The vast majority of the world’s extreme poor are smallholder farmers who live in rural underserved areas far from bank branches and ATMs. Here, the gap in access to financial services is largest for women.

Grameen Foundation develops networks of mostly female agents to bring financial services directly to women clients in rural areas. Our digital tools (which may use interactive voice response, augmented reality, and artificial intelligence) train agents in their local languages and regardless of their level of literacy. Meanwhile, the proliferation of cell phones enable growing numbers of women to access financial services where they are.

In India and the Philippines, we collaborate with partners to recruit, train, equip and manage financial service agents who are transforming access to financial services in their communities. In Africa, we have worked with banks and microfinance institutions to link with mobile network operators (MNOs) to use their network of agents as access points for bank accounts.

Grameen Foundation’s DIVE program has trained 100 Grameen Mitras (translated as “Friend of the Village”) to act as digital financial service agents, training their neighbors in financial literacy and connecting them to vital services available over their mobile phones and through the government’s digital platforms. Each Mitra will reach an estimated 1,500 households, benefitting up to 250,000 people with first-time or improved access to savings, insurance, utility bill payments, and government programs like pensions.

After little more than one year (as of January 2019), the Mitras facilitated transactions worth more than 2.6m Indian Rupees (US$36,590), showing the significant pent-up demand for their services among poor populations in India. In addition, the Mitras are transforming their own lives: learning new skills, generating an additional stream of income, and gaining greater financial independence.

The DIVE program is supported by Citigroup Global Markets CSR and implemented in technical collaboration with the National Payments Corporation of India, as well as several local partners.

Grameen Foundation’ Community Agent Network (CAN) embodies a new approach to extending financial inclusion to people in poor, remote areas. It has reached up to one million low-income people in the Philippines, where more than one-third of the country’s 7,107 islands have no banking infrastructure.

Funded by the JPMorgan Chase Foundation, CAN combines a mostly female agent network with a digital financial services platform that can connect people with banks, utility companies, government agencies, and other businesses. It has engaged nearly 1,900 agents, 75 percent of whom are women who operate small local shops (sari-sari stores).

In the first two years of operations (2016-2017), CAN agents facilitated more than 4.3 million transactions valued at 1.3 billion Philippine Pesos (USD 24.9 million). Sari-sari store operators can now help their customers send payments for services, transfer money to loved ones, deposit money into a digital account and much more.

In creating CAN, Grameen Foundation partnered with financial technology providers Action.Able, Inc., and FSG Technology Ventures, Inc.  The partners created digital “point of service” devices that can connect directly over any mobile network, with any bank, as well as with government agencies and other businesses.

Sustainability is built in to the program: both the agents and the technology companies get a small fee for each transaction; banks get new customers, and local people are able to bank without spending large sums of money and hours of their day traveling to a distant bank branch.

Uganda has a big shortage of bank branches and ATMs. In 2012, there was less than one financial services access point for every 20,000 people nationally—and fewer still in rural areas. Grameen Foundation has been on the cutting edge of a wave of change, using digital technology to connect underserved communities to formal financial accounts using mobile money.

In 2012, we began work to transform two financial institutions to enable them to reach the rural poor. To do so, we worked with Centenary, the largest bank in Uganda; Pride Microfinance Limited, a wholly owned government financial institution; the mobile network operators MTN and Airtel; and the technology company Cellulant.

With Cellulant, we developed a digital platform that enables account holders at Centenary Bank and Pride MDI to use their mobile phones to make deposits or withdrawals at any mobile money agent location across Uganda. Suddenly, the need for long and sometimes hazardous trips to the bank was gone. The new service launched in 2015 enables fast, flexible, secure, and remote transactions for any of Centenary Bank and Pride MDI’s clients.

While Grameen Foundation’s role has ended, the channels and products we developed live on as a sustainable digital financial solution that truly serves the rural poor. It is attracting new rural customers every day. As of October 2016, the system serves more than 170,000 rural customers, and is growing by an additional 10,000 clients each month.