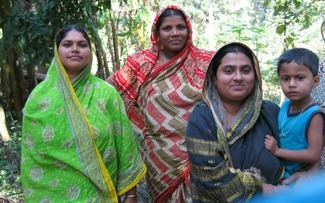 In 1977, on the heels of the Bangladesh famine, Professor Muhammad Yunus at the University of Chittagong founded the Grameen Bank, making small loans to impoverished people. Rather than require collateral, the bank worked based on trust, and on the belief that small loans are a better tool than charity to fight poverty.

Today Grameen Bank provides microloans, savings accounts and other financial services to more than eight million poor women and their families in Bangladesh. It has been a model for microfinance institutions around the world. In 2006, Professor Yunus and Grameen Bank jointly received the Nobel Peace Prize.

In the decades since the founding of Grameen Bank, the Grameen family of businesses and organizations has grown, and today encompasses dozens of sister organizations in Bangladesh and around the world. They operate across diverse sectors, including health care, education, communications and agriculture.

Founded in 2008, Grameen America is dedicated to helping women who live in poverty build small businesses to create better lives for their families. It offers microloans, savings, training and support to transform communities and fight poverty in the United States, based on the Grameen model developed in Bangladesh. Grameen America is a sister organization of Grameen Foundation with its own independent management and board of directors.

Over the past 40 years, Professor Yunus has inspired the creation of dozens of Grameen-related organizations that address various social challenges. Here is a list of the most active organizations and their work across the world.